Evaluate your current reproductive health with a comprehensive fertility health screening, then use the results to assess your future family-building options and to determine if fertility treatment is right for you.

A comprehensive fertility health screening is the best way to learn about the health of your reproductive system. This screening is comprised of three parts: bloodwork, an ultrasound examination, and a consultation with a fertility physician.

At NYULFC, our goal is to provide information, education, and data-driven guidance to individuals seeking fertility care. Once we reach a diagnosis, we work together with our patients to determine the optimal, individualized treatment plan for each patient or couple. Please note: although many guidelines detailed below are based on a female individual’s health and age, if you will be undergoing treatment with a partner, an initial consultation for both partners is recommended.

When is fertility testing recommended?

The most common reasons for requesting a comprehensive fertility health screening include:

How is female fertility testing performed?

NYU Langone Fertility Center provides state of the art fertility testing and treatment in a compassionate, patient-focused environment. Female fertility testing includes bloodwork and a transvaginal ultrasound to assess AMH and FSH levels as well as an antral-follicle count (AFC). These tests allow your care team to assess your ovarian reserve – the quantity and quality of eggs remaining in the ovaries. Because a woman’s ovarian reserve decreases over time, the tests performed during a Fertility Health Screening can help identify a condition known as Diminished Ovarian Reserve (“DOR”). A DOR diagnosis indicates a diminished reproductive potential due to a decline in the quality or quantity of eggs remaining in the ovaries. Individuals with a DOR diagnosis may choose to pursue many different options to achieve a pregnancy, including fertility preservation, IVF, donor eggs, and more. 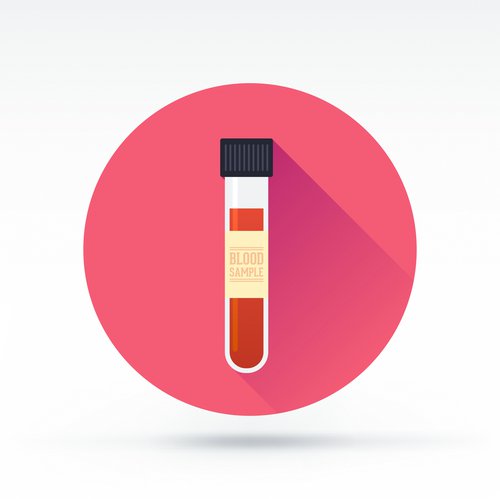 Anti-Müllerian Hormone (AMH) is produced in ovarian follicles and levels are tested via blood work. Measuring AMH levels provides a good indication of an individual's ovarian reserve but does not predict a woman’s ability to get pregnant in any given month as it does not give an indication of egg quality. AMH levels are typically highest during puberty and gradually decline as women age.

Follicle Stimulating Hormone (FSH) is produced by the pituitary gland and is integral in the development of maturing follicles. FSH levels are often used to determine the quality of eggs being produced. In both men and women, too much or too little FSH can impact fertility. Levels of FSH are tested via a quick, routine blood test on day 2 or 3 of your menstrual cycle (which begins on the first day of bleeding).

During your Fertility Health Screening you will also receive a transvaginal ultrasound to assess your Antral Follicle Count (AFC) - another way your doctor can measure your ovarian reserve and gain an understanding of where fertility stands in relation to your age. Inside the ovaries of the female reproductive system, ovarian follicles (fluid-filled sacs) house immature eggs. Over the course of a typical menstrual cycle, several follicles develop, and ultimately one mature egg is released during ovulation. During the early stages of the menstrual cycle, antral follicles are large enough to be seen via ultrasound. During an AFC, your physician uses the ultrasound image to visually count the number of egg-containing follicles that are developing in each ovary. 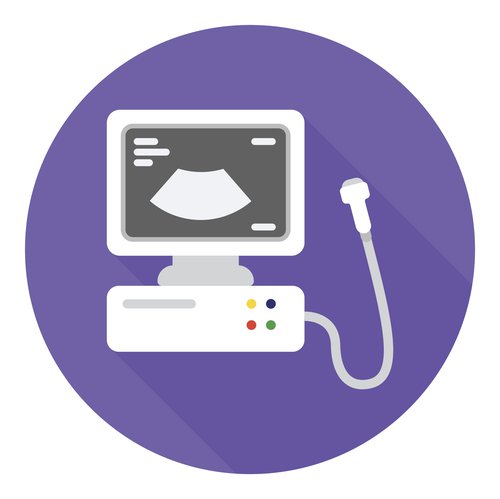 How is male fertility testing performed?

Semen analyses look at three main factors: sperm count, morphology (the shape of the sperm), and motility (how well sperm swim). This analysis helps pinpoint potential issues with sperm volume and/or motility (movement), which negatively affect the ability to create an embryo naturally. Even if the test results come back as “normal,” some doctors may still ask for a second test to confirm. The semen analysis process is relatively simple - patients may produce a sperm sample at home using a sterile container provided by our facility, or may visit our office to provide a sample. The sample is assessed by andrology staff, and results are discussed between the patient and the physician.

What is a normal AMH level?

The interpretation of AMH hormone levels is not an exact science. Because the test has not been in routine use for many years, the levels considered to be "normal" are not yet clarified and agreed upon by all experts. Furthermore, AMH levels are dependent upon age, so what is considered "normal" for one patient may not be in the normal range for another. The figures below include AMH interpretation guidelines from fertility literature and from our experience. 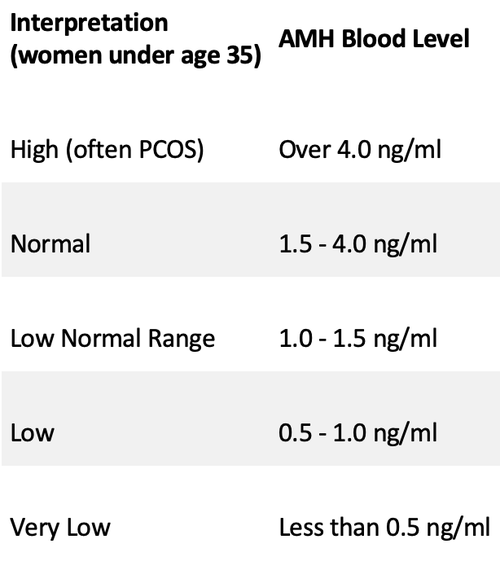 Can AMH testing be done during menstruation?

Yes! An AMH test can be done at any point during your cycle.

How accurate is the AMH test?

While testing of AMH levels is very accurate, please do not get carried away with the cutoff values for any given range. For example, the difference between a 0.9 and a 1.1 ng/ml test result puts a woman in a "different box" in our table - but there is very little real difference in fertility potential. In reality, it is a continuum - and not something that categorizes well. It is important to remember that AMH levels may fluctuate and results can vary from one lab to the next. More will be learned regarding anti-mullerian hormone levels and outcomes as we continue to use the AMH fertility test and study the relationship between AMH hormone values and fertility, ovarian responsiveness, chances for IVF success, etc. For now, it is just one of the tools we use to assess fertility. If you have any questions or concerns regarding the results of your AMH test, speak with your physician who will be able to provide insight as to how your AMH level reflects your overall fertility health.

What is a normal semen analysis result?

The below outline the results of a normal semen analysis based on guidelines from the World Health Organization.

Ready to Get Started?

At NYU Langone Fertility Center, we are dedicated to providing our patients with exceptional clinical care to help them build their families. Our first job is to support you, so please bring all your questions to our team of world-class specialists for an introductory consultation.